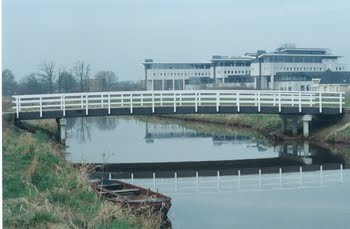 Another bill came today. It reads on the envelop Regionale Belasting Groep. When I asked, hubby could not explain it fully. We just arrived home and tired from a whole day’s activities plus 2 hours on the road. For both of us, it is just another among the never-ending bills that comes to our post box. Hubby quickly dismissed it as another rip-off bill amounting to almost 332euros.

Sorting through a number of bills today, I decided to read the mini brochure that came with the letter. If you are paying that much amount of money, you would want to know where it goes. I had to laugh when I read the introduction sentences “De tariven van de waterschapbelasting stijgen in 2010. Dat is geen goed nieuws in deze economish magere tijden” which roughly translates to  “The increase in the waterschapbelasting in 2010. That is not a good news in this tight economic times.”

What exactly is waterschapbelasting and why, oh why, does it cost this much money?

The brochure from Hoogheemraadschap van Delfland, put it in a very nice way that your initial anger towards too much tax will disappear right away – stronger dikes, dry feet and clean water “omdat Delfland moet blijven werken aan veilegheid en leefbarheid” because Delfland must work towards safety and livability.

How do they do that exactly?

Here are the cijfers (numbers):

Again, these are just for the Delfland and doesnt cover the rest of the country.

In principle these measures are necessary and important in a country sitting below sea level. How scary will it be if the flood of 1953 in Zeeland will happen again? The Dutch have learned from their tragic experiences with water and the government knows to prevent it from happening again. In addition to that, the Netherlands is a pretty clean country. You can actually drink tap water without worrying about contacting bacteria from it (although I would not recommend the tap water from Rotterdam). To keep everything under control, clean water and flood prevention, I can understand that these taxes are a must.

What I don’t get though is when a person is living alone, s/he is only taxed 1/3 of the cost than when there is two or more people living in a house. I mean, why should they charge it like per person and not generalize the tax between two and more? According to personal observations, there are at  least 3 or a maximum of 8 people (mostly buitenlanders) living in one apartment at least here in my neighborhood. I do not find it fair that they are taxed just as much as me and my boyfriend whereas they actually have more consumption (waste water from their houses). I think the government should look into this to make these kind of taxes fair for everyone, Dutch and buitenlanders alike.

So have you paid your waterschapbelastingen already?

On the charm of Princess Maxima