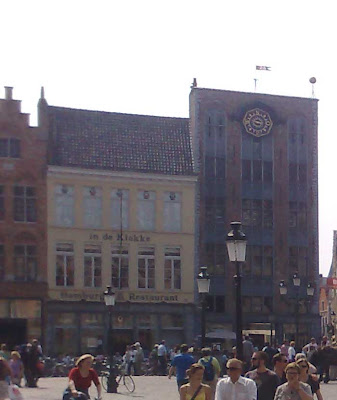 After climbing the Belfry, the tower where Clin Farrel jumped from in the movie In Bruges, our knees are shaking and out bodies are craving for coffee. We searched for a good cafe which sells reasonable priced coffee but because we don’t want to walk so far, we ended up few steps away, in a restaurant and tea room called Meridian 3. (the 3rd building to the right is the Meridian 3 restaurant and tea room) 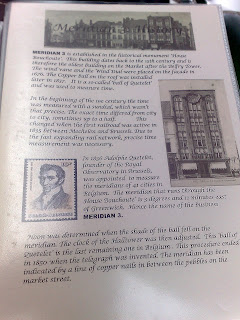 The photo above contains the history of the Meridian 3. I would not elaborate on them more since you can just click on the photo and read about it. The photo is big enough to read, I suppose.

My boyfriend is dying for coffee since he didnt have one good coffee when we left Netherlands (the Albert Heijn type is not considered a good one) while I am craving something sweet. And what’s the best thing that you must have in Belgium beside chocolates when it comes to sweet stuff? Belgian waffles natuurlijk!

Belgian waffles would go best with a good espresso. MK ordered a double while I am ok with single espresso because I don’t want my heart racing while shopping at the Braderie (that would make more purchases). I also ordered a waffle with pure Belgian chocolate sauce. Mouth watering enough to read right? I most certainly agree. 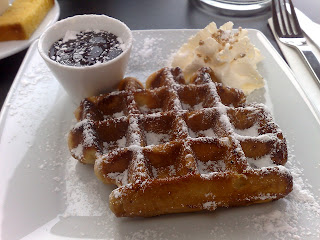 The waffle is a bit crusty and tough, more chewy is probably the right term. I learned from Wikipedia (always a good resource site) that there are two varieties of Belgian waffles, the Brussel waffles which is “generally, but not always, lighter, thicker, crispier, and/or has larger pockets compared to other waffle varieties” and the Liege or Eastern Belgium variety which is “richer, denser, sweeter, and more chewy waffle. The most common type of waffle served in Belgium”. 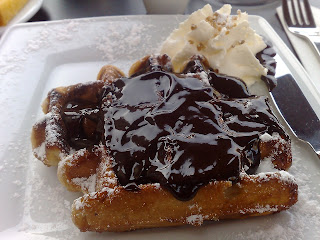 That being said, I enjoyed my waffle as much as I can. I think it’s worthy of the EUR4,50 that I have to pay for it (quite pricey eh?). Although I was not able to finish it because it’s just too big and too sweet for my taste, MK also enjoyed it as much as I did. 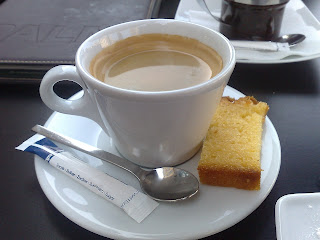 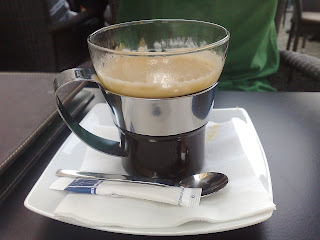 Since I know how MK wants his espresso, I just gave him mine, sweet eh :), and had the double espresso for myself. Disappointed with the taste, I just pour a whole pot of milk on it and two sugar packets which makes it taste like the 3-1 coffee that is more popular with Filipinos.

So we have to pay more than EUR10,0 for a waffle and two orders of coffee but that was a great break and a reward for climbing that steep and high tower of the Belfry. Even if it wasn’t the best espresso that we had (a separate post for the best one), we enjoyed it, on a warm Belgian afternoon, in the city centre with our sigarettes.

Women and Water: The brilliance of Edvard Munch

What I love about Norway