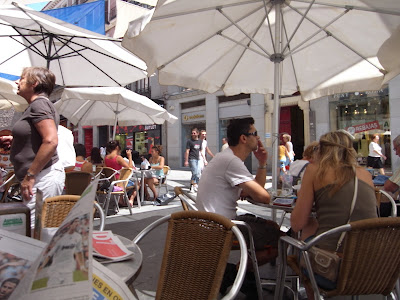 This is a long overdue post but I hope you will still enjoy this.

I arrived in Madrid late already and didn’t have the energy to still go out on a Saturday night. My friend and I immediately launched into updating each other’s life and then at around 11:30PM, we crashed into her friend’s house. H is so nice and I enjoyed hanging out in their flat and meeting her nerdy British-Chinese housemate. We hit the sack at around 3AM which I gathered is quite normal in Spain.

Anyway fast forward to the morning after. I think we woke up at around 10AM and I was starving. We were supposed to meet up some of D’s friends at 1AM to go to a park and lunch there but my stomach is demanding food and it couldn’t wait any longer. So off we went to find a restaurant. I told D that I will only eat Spanish food in Spain. She took me to a restaurant in front of her school at Calle Carmen. 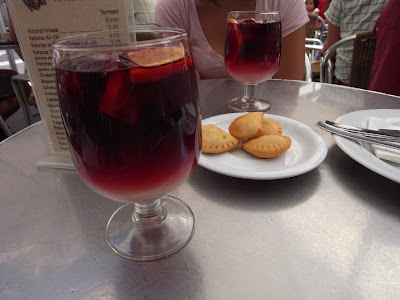 I know it’s early in the morning *in Spanish standard, but I am craving for wine. D instead suggested that I order Tinta de Verano, red wine with orange, lemon and coke. I couldn’t describe the taste but it was surprisingly refreshing for an early morning alcohol intake. D also had a glass and it made me a bit alive after not having enough sleep and thinking too much.

Then the waitress brought some small pies which if I remember correctly has minced meat, tomato paste and a lot of minced onions on it so I didn’t fully enjoyed it. 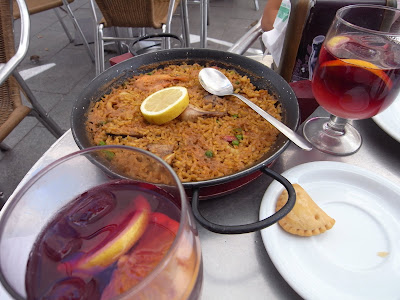 For breakfast *Spanish standard, I ordered the ever famous Paella of Spain, Paella Mixta in particular, with different kinds of seafood including few slices of squid *probably from one squid, two pieces of prawns, two pieces of mussels, a couple of tiny pieces of chicken. All for EUR13,55. Not bad eh, for such a huge serving which filled us both.

The verdict? So-so paella. Ive tasted far better paella’s back home in the Philippines, richer in taste and color because of the generous servings of ingredients on it. Or is it just the Filipino way? When the Spaniards colonized our country for more than 300 years, the cuisine is one of the most significant heritage that they left and we are still perfecting them.

For the finale, I ordered what my friend recommended when I touched Madrid airport, Cafe Cortado. He said it is his favorite. I was curious. 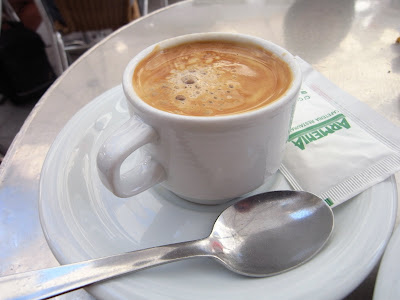 Cafe Cortado is a variation of coffee with warm milk. They use espresso instead of regular coffee. First they bring you a single espresso and they pour milk afterwards, about half the amount of the espresso. It’s ok but I am not big fan of espresso or coffee with milk or sugar. I like my coffee black, my espresso strong and I steer away from combination drinks. So, so much for experimenting but at least, I’ve tasted the difference.

First Spanish meal is ok, nothing fancy. I satisfied the main reason for eating and that is to fill my stomach so I don’t have any complaints. Just a little disappointed with the paella.

One more Spanish meal to be posted and a merienda *snack which was oh so good!