I came to Faroe Islands for three reasons – to run Torshavn Marathon, to eat at KOKS and to see a magical place I never knew existed. Yes, in that order. So after we booked our flights, I reserved a table right away.

Much have been written about KOKS but theirs is not exactly an original concept. KOKS follows the foraging movement made popular by two-star Michelin restaurant NOMA. Accolades-wise and price-wise, KOKS is in the same category but they don’t have a star (yet). 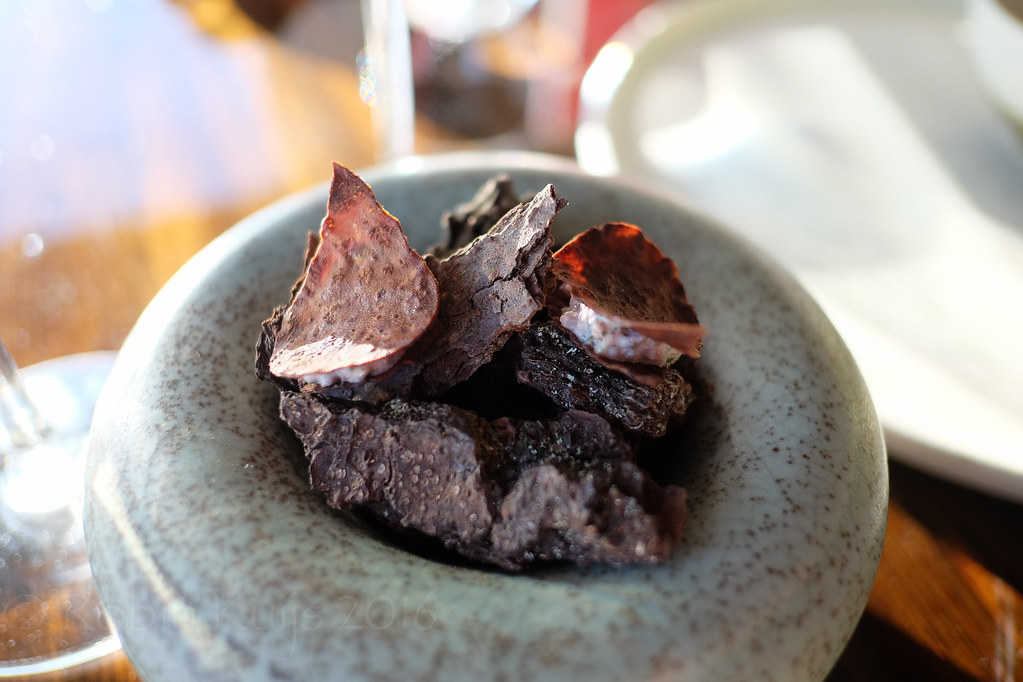 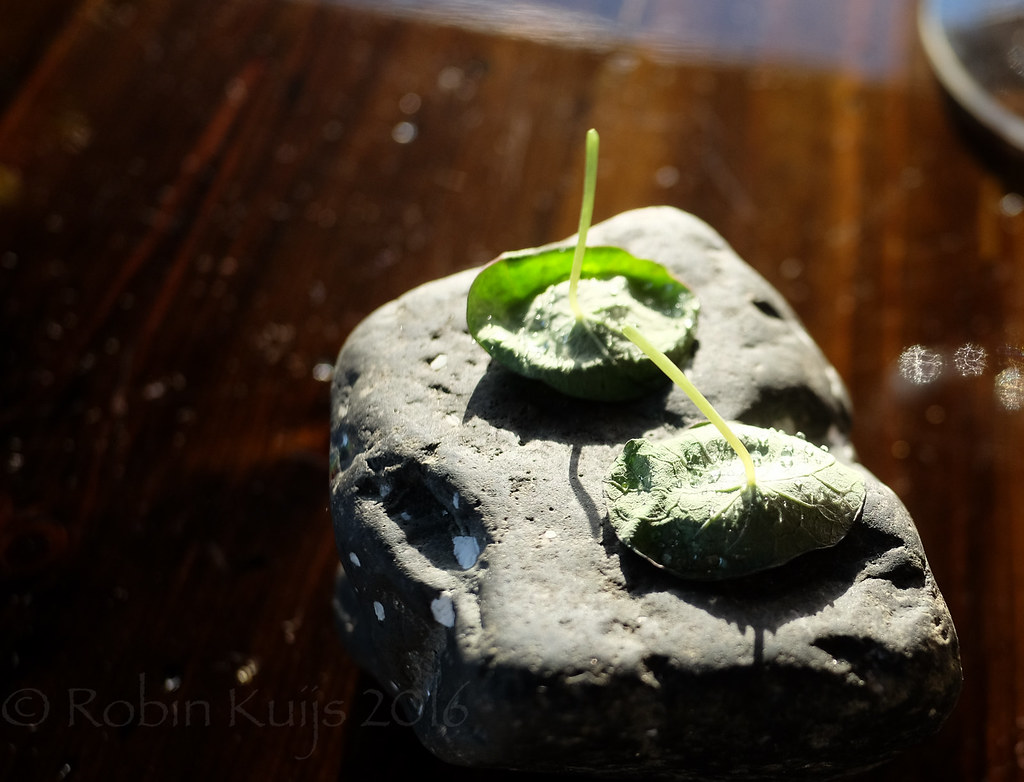 I thought that the tasting menu consisted of 20 dishes but there were only 17, each came with their own story, each one carefully arranged on a vessel as unique as their origins, however ridiculous it may look like to some of my readers.

First came cod crisps with lamb heart, followed by a 400-year old mahogany clam, then horse mussel soup, in a succession intended to slowly whet the taste buds. But we were famished, having just completed a 5-hour marathon so we gulped down every amuse as fast as they arrived.

Then the chef came with a huge leg of lamb and explained skerpikjøt, muttons wind-dried for six months, served on top of dried moss. The first round was concluded with two scurvy leaves with cream and a tiny crisp-bread with fermented lamb (garnatálg) topped with cheese, which tastes exactly like our own “tuyo” (dried herring).

Foraging and fermentation are a way of life in the Faroe Islands. The soil is not fertile for vegetation so people make do with whatever crops out of the ground, including edible grasses and moss. But the North Atlantic Ocean is bountiful and they are gifted with sea urchins, coquilles, expensive fishes like cod and the very controversial whales and occasionally sharks.

Sheep are an integral part of the island’s diet, having more sheep than the local population. KOKS philosophy is founded in these local catch and traditional delicacies, educating diner about the culture of Faroe Islands. 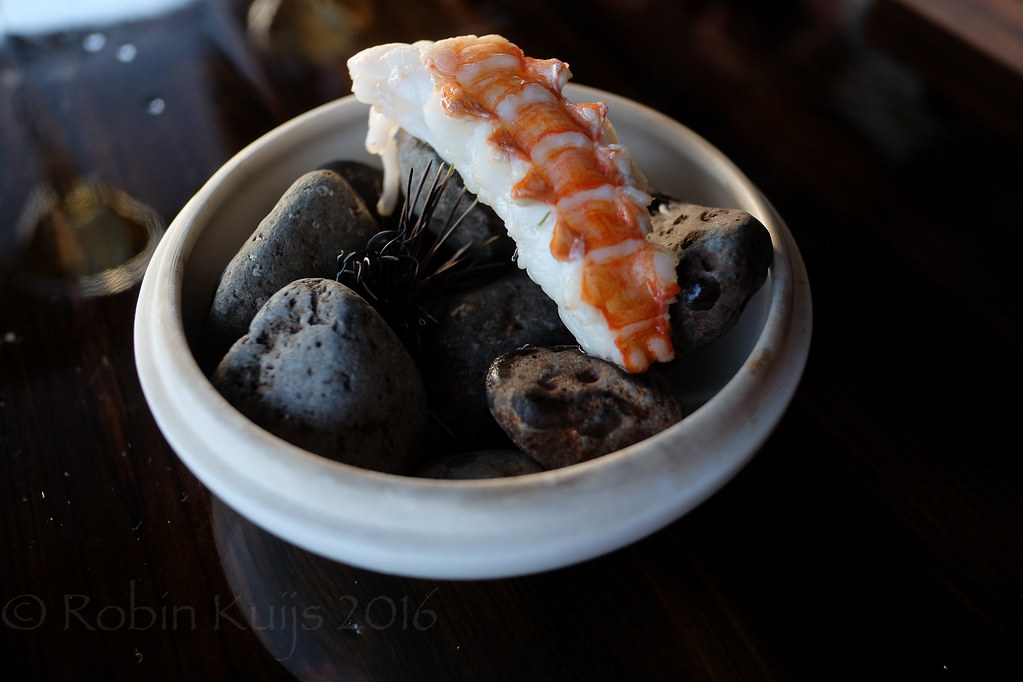 Our first main was raw cod with different herbs, then crab and capellin roe with rhubarb sauce, followed by a single smoked langoustine, and then steamed skate with peas. I was secretly smiling watching my husband enjoy the freshness of the sea bounty.

Being an island girl myself, I appreciate how chef Poul Andrias Ziska left the seafood almost untouched by seasoning, letting their own flavours speak for themselves. Fresh seafood are very sweet, particularly that pine-smoked langoustine, caught just a few hours before we arrived.

I wish though that we were served more of this. I could have skipped the steamed skate altogether, which I think needed a dash of salt. I was not too impressed by the side dish of mashed herbs either, while the fermented egg yolk appetizer was just a tad too salty for my tastebuds. Thankfully we had a bottle of Mosel Riesling, the mineral and hint of sweetness in the wine cuts through the overpowering savouriness of the dishes. 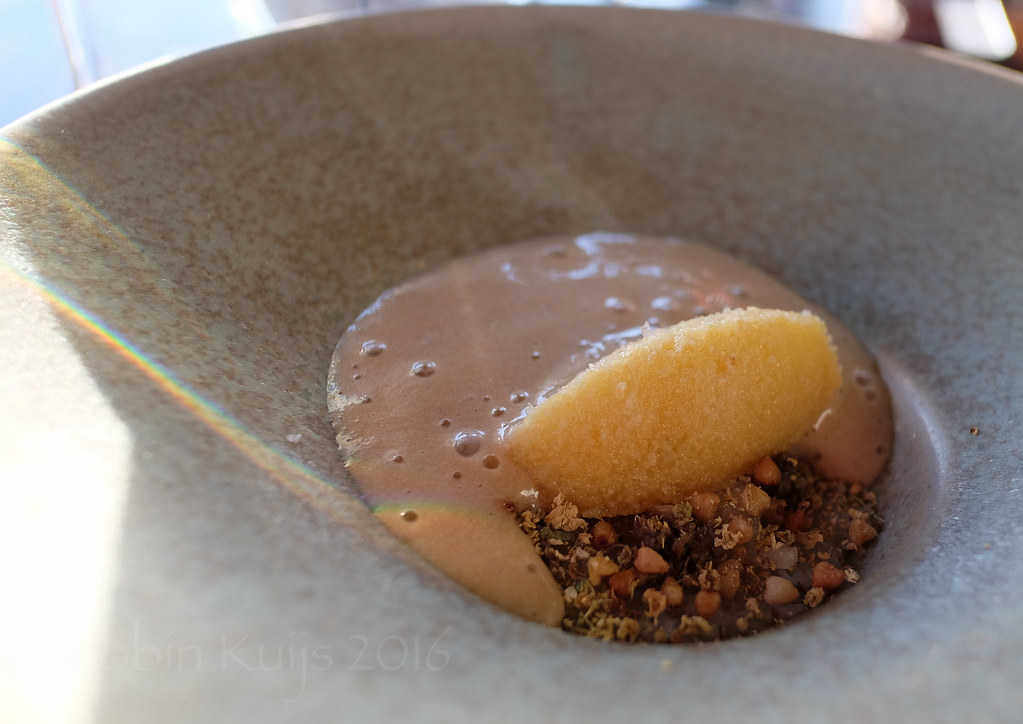 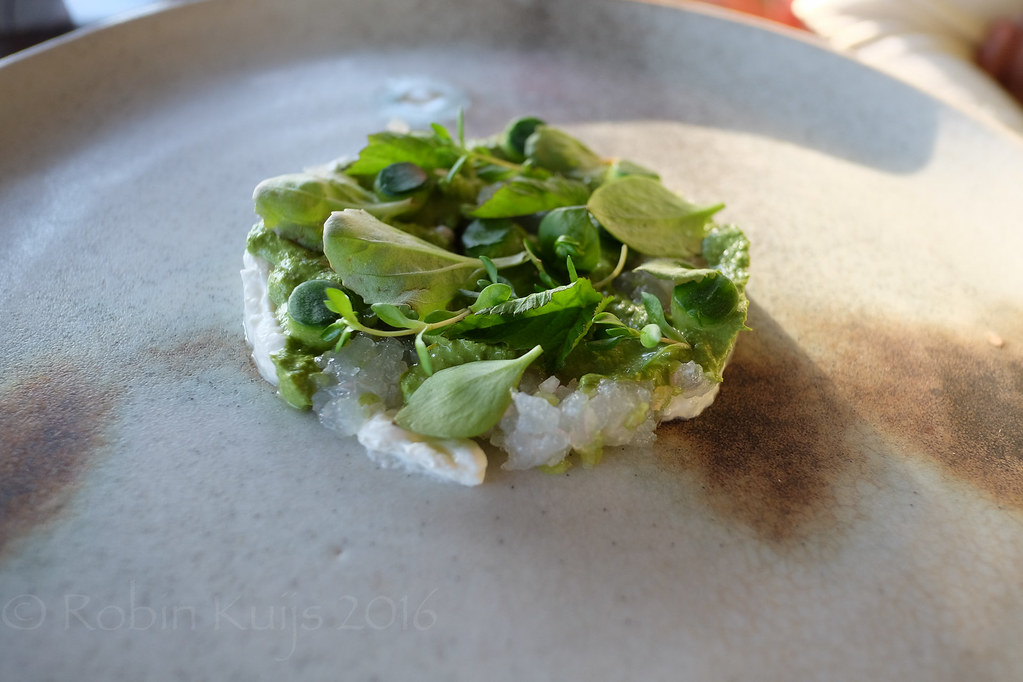 “Are we eating too fast? I think we are eating too fast,” Robin asked Karin when she took the plate of skate from our tables. “We can take a break,” she says and refilled our wine and water glasses instead.

I wasn’t expecting Robin to burst into romantic lyrical. It might be the remoteness of this place or the pastel glow cast by the setting on the sea and the mountains. It might even be the euphoria of our marathon earlier but I was truly surprised when he said:

“This place is so perfect, it would have been nice to propose to you here. Too bad I don’t have a ring.”

I took the tanzanite off my finger and gave it to him to use as a proposal ring but he declined. He wanted to wait for better circumstances. And for the proper engagement ring. “And besides,” I said “We’ve just run a marathon in the mountains. Just one unforgettable moment at a time.” 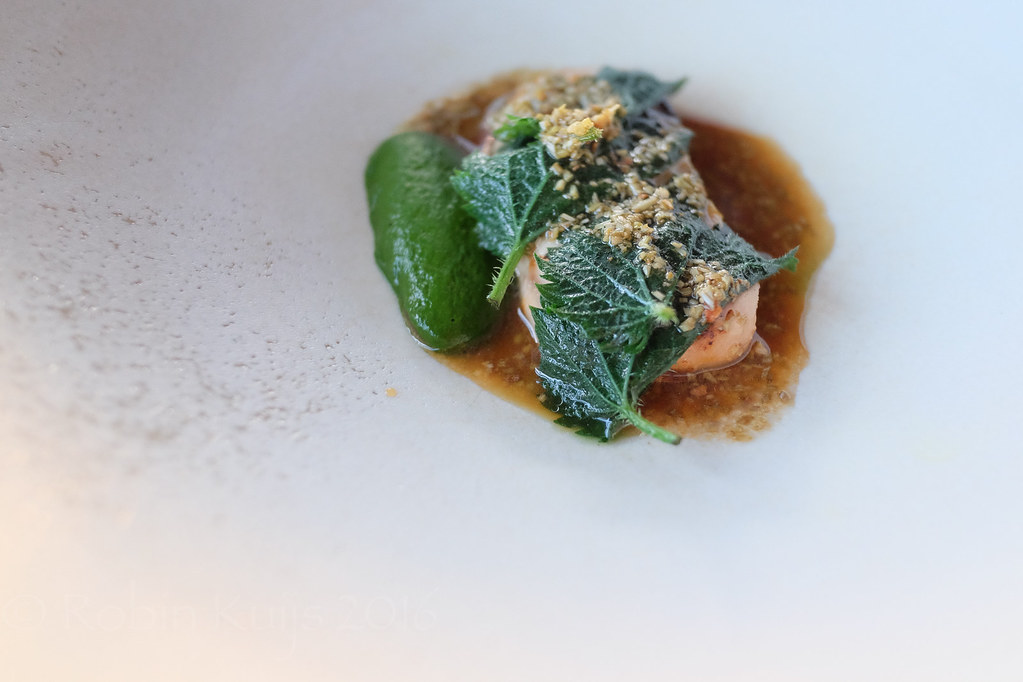 We resumed our meal with porbeagle shark served with nettle, the stinging weed that can give you rashes. How you imagine a weed taste likes, that’s exactly how nettle tastes when you chew on it, but soaked in sweet sauce (I couldn’t remember what it was) it wasn’t awful at all. In fact, I love the combination of weed and the game-y taste of the shark.

Then finally the bread was served, thick slices of freshly-baked sourdough with Faroese butter and fermented rest meat (ræstkød). Everywhere in Torshavn, my olfactory senses were assaulted by the heavy, woolly smell of sheep. With this final main, I was finally able to taste it.

Unfortunately, I was already getting full and wanted to leave some space for dessert. So being the Dutch that I am, I asked them to pack it for me for tomorrow’s breakfast. 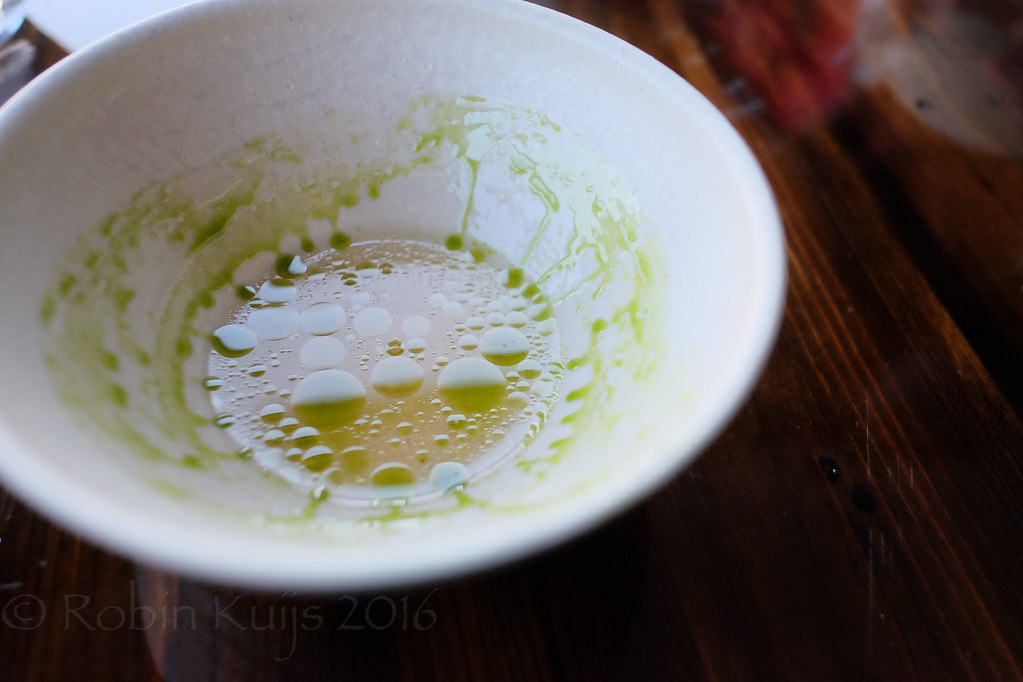 After the ræstkød, I was ready to go home and sleep. But there were still four dishes left.

The first was a cold, sticky lemon verbena, apple and thyme soup, which was a welcome respite for my tastebuds after all the savoury dishes. The crisp acidity delivered a cleansing effect to the palate. And it smelled so fresh and delicious, I could use it as perfume.

Then there was angelica crumble, an herb-y aromatics commonly used together with rhubarb jams in the Faroe Islands, as told by the lady from Nólsoy tourist centre. She let us taste some of it when we visited the day before but warned us that eating too much can upset your stomach. It was served together with sorrel ice cream. 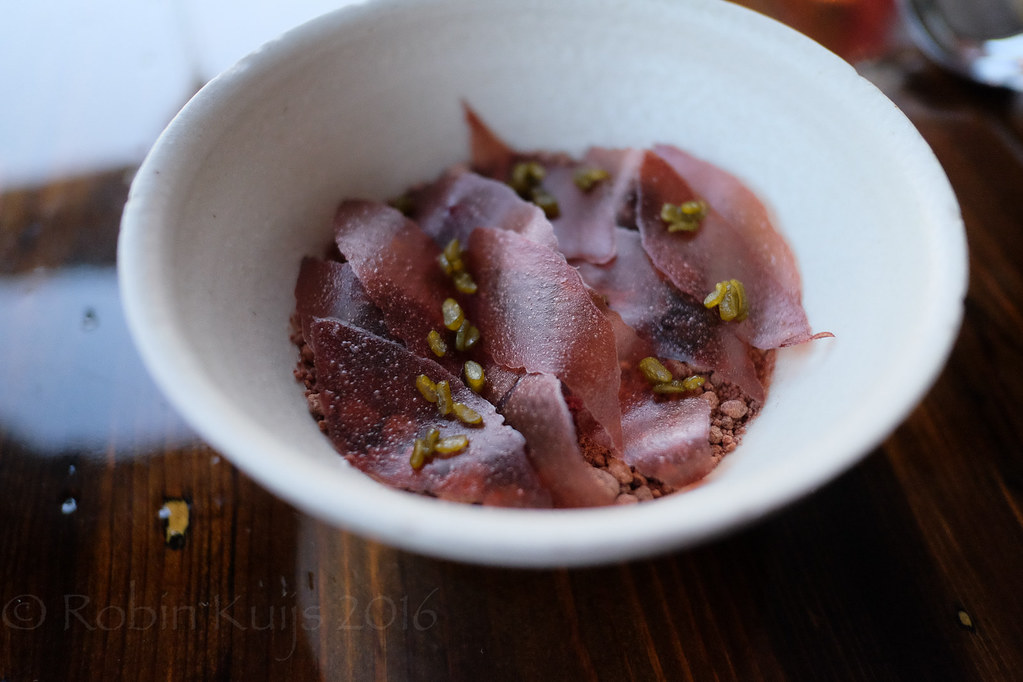 And finally (and I have to say the best dessert I’ve ever had), dulse seaweed served with chocolate crumble, fermented blueberries and dulse mousse. Sweet, a bit tangy, a bit crunchy, silky-smooth on the mouth and simple heavenly. My marathon reward ended on a very special note.

We asked for the bill right away. It was 11PM, the sun has retired but a lingering dusky colour painted the sky. We were tired, very tired. All we wanted to do was lie down and fall asleep. When the bill came, I painfully reached for my credit card.

The damage? €430 including tip and the taxi ride. For a moment, I did question my intent to dine here.

It was an exceptional meal alright, the service was worthy of a Michelin-star, although I saw a huge fly on the wall, the restaurant was cozy and well-ventilated with a priceless view. Sure I learned a little about the way of life in the Faroe Islands, their traditional dishes, their struggle with the sea and the elements. But are they worthy of my hard-earned euros?

I found my answer in two things: the 20 or more staff (especially that boy dedicated to refill my water glass) hired by the restaurant to be able to give me a special experience and that slice of shark served for the pleasure of my tastebuds.

I understand the controversy surrounding whale grinds in the Faroese but I am not in the position to judge. The difficult life in these remote islands has been explained to me by a 64-year old seaman, who knows what must be done in order to survive. If whale was on the menu, I would have eaten it too, like I did in Bergen.

Whales killed in the grinds are for food. They use every part of the animal, from meat to the blurbs, distributed to the residents. Recently however, the health ministry issued a warning regarding the presence of heavy metal toxins in whales and advised pregnant women not to eat them. The Faroese people too, are aware that their tradition may not live long.

I know that the oceans are dying. Sharks are an important part of the ecosystem. One was killed for me to have that unique dining experience. Surely, it should not come cheap.