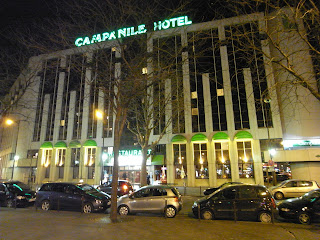 After depositing our bags in Hotel Campanile, our home in the next two days (hotel review here) we hurried outside to look for a restaurant. There are not so many choices in Boulevard Berthier, most are burger joints or Moroccan/Middle Eastern fastfood. We walked in to the first restaurant that we saw which offers real food. As amusing and ironic it may sound, we decided to eat Japanese food as our first meal in Paris. 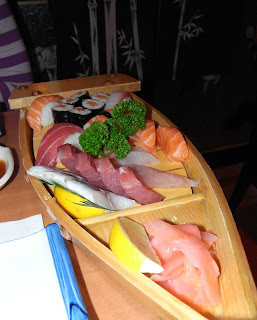 The restaurant of choice was Soleil de Kyoto, a dimly lit dining establishment that offers genuine and very delicious Japanese cuisine. When we entered, the French speaking Japanese waiter greeted us with in his heavily-accented “bon soir” and ushered us to a four-seater table. Like the usual Dutch customary in restaurants, he first asked what we would like to drink. We ordered half a bottle of Cote du Rhone as our bodies are aching for something that can relax it. 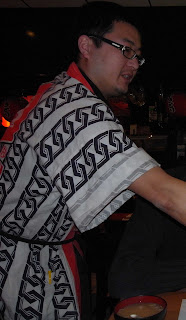 The ober (waiter) came back with the wine and asked us to sample it. But hey with a stomach yearning for food, the need to decide on the quality of the wine is the last thing on our mind. Although the wine didn’t disappoint anyway. So we ordered right away, the Petit Bateau, a plate of sushi and sashimi. It doesnt sound that much (yes, it is petit) but after devouring the plat, we realized that we’re not that voracious when it comes to pigging out.

And of course like a true Asian, I have to eat my food with the rice, I ordered two cups of Gohan. I was thinking that maybe I can also eat half of MK’s rice since he is not that fond with it. I was wrong, he ate half of mine! 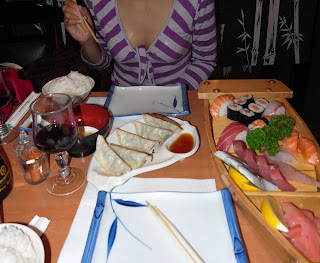 As as side ordered we had Ravioli Japanese, a dish that I have learned to love despite the initial hesitation while I was still in my country.

You can say that it’s just our stomach speaking and not our minds but we really find the food very delicious. The fishes were fresh, especially the tuna and salmon, the ravioli is nicely done, not undercooked or overcooked and the wine is fantastic. I don’t know if Cote de Rhone is the best pair for seafood but I couldn’t complain, and so does my stomach. It was a sumptous meal.
We finished the dinner with an order of Lychees and another order of half a bottle of the same wine which we took back to our hotel. When it comes to good wines, half a bottle is not enough for me. Our total bill? EUR42.90! Not bad eh, not expensive at all and we went out fulfilled.
Soleil de Kyoto
3, Boulevard Berthier
75017 Paris
T: 01.46.27.63.92

First thing I love about Paris: The availability of half bottle wines. I haven’t seen any half-bottle wine selling in Gall n Gall, Albert Heijn or Lidl here. It can be very helpful especially for people like me who doesn’t know when to stop when it comes with wines.

Campanile Paris Boulevard Berthier
Boulevard Berthier – Paris 75017 – France
T: 01.46.27.10.00
E: resaind@campanile-berthier.com
URL: http://www.campanile.fr/
Our hotel in Paris is comfortable enough. Just as long as it meets my requirement of cleanliness, basic amenities and a nice bathroom, I am fine with it. I think it didn’t take long before we fell asleep, completly knocked down because of the long journey.
As a gazed down at the flickering lights outside my hotel window, I finally congratulated myself at being here in Paris. The city is lovely, even when if were not billeted in a hotel with the view of the Eiffel Tower. The spring air, the chic ambiance and the spirit that is uniquely Paris engulfed me, the excitement building up once again like a virgin on her first night and once again I began to dream about the City of Lights. But this time, I am going to wake up on it.
France Weekendje weg
Share:

My 1st Italian trip in Experience Travel and Living Magazine

Weekends with my mother - Rotterdam and The Hague

Liquid from the gods: a dinner in Alghero