I missed the Amsterdam Gay Pride this year. I have already experienced the colors, craziness and festivities the year before and even made a story about it for the Philippine television. To watch the festival again, which follows the same formula, might make the beautiful impressions boring.  So I opted instead to go to Antwerp and enjoy a scrumptious dinner with the family.

But in 2009, I had one memorable story that happened on the train on the way to the Gay Pride. 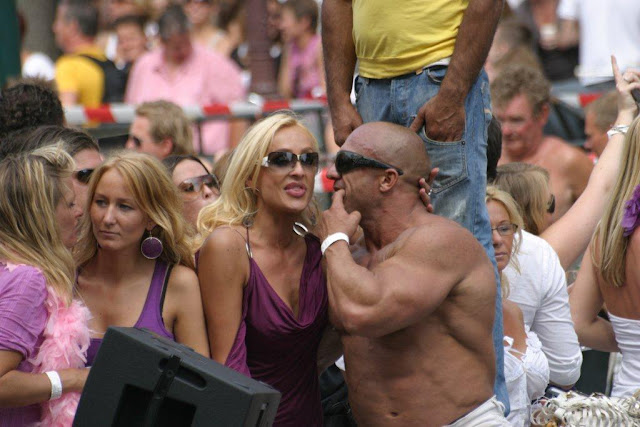 The train from Rotterdam was so crowded with passengers participating in the parade. My husband and I couldn’t find a place. As we inched towards the back, we finally saw a spot near the window, in that tiny place under the stairs. There was a man sitting there and he was reeking of alcohol. He was wearing an old black shirt and denim pants, like a construction worker. His eyes were red and sullen and he looks like someone who has been smoking pot since he was born. His lips were dry and his body looks worn out and deteriorating. No wonder why no one wants to sit beside him. In his hands he was holding a paper bag. 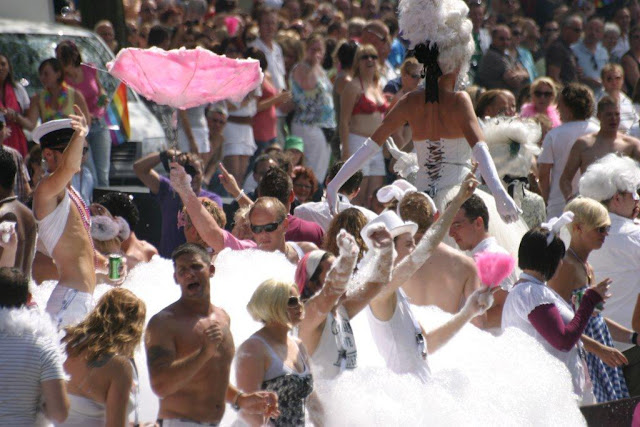 I was hesitant and afraid. But having no choice, we took that place that nobody wanted. Robin was beside, if anything should happen.

I didn’t want talk to him and I was avoiding even a glance. We had our fair share of trouble with drunken men sometime ago, when one of them approached us to for a cigarette but ending up throwing the lighter to my husband. That is the last thing I want  inside a train.

But the man got friendly and started conversing with Robin. Somehow I felt at ease and the fear slowly disappeared. He doesn’t speak English so when he asked me where I came from, I tried my best answering him in his mother tongue. It was only my 7th month in Holland.

He said I speak good Dutch for such a short time of living here. I thanked him and said that it’s a must if I want to get a good job in this country. He nod his head and he looked outside, with that very sad look on his face. Then he got a can of beer from his paper bag, drank from it until it is halved.

Hubby asked him what he does and so he told his story. He started working as a carpenter when he was 16 years old. He said he was very good and he earned a lot of money from it. While building other people’s house, he forgot to build a family. 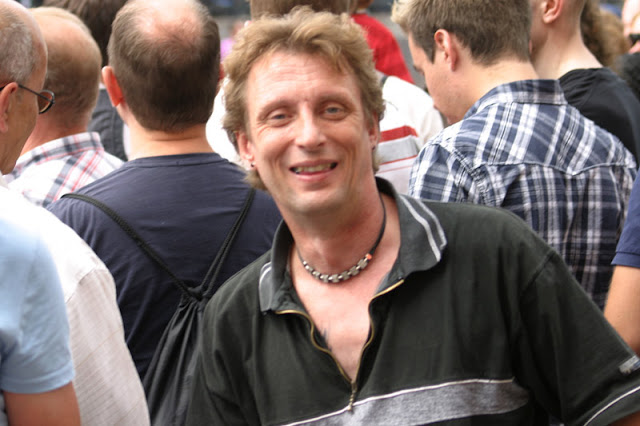 I still don’t know his name.

“Ik werd zo moe. (I got so tired),” he said with a low, weary voice. You could feel the weight of frustration in the way his shoulders fell and his lips tightened.

And so he turned to alcohol, too much that he became an addict. He would consume of bottle of vodka in the morning, as his breakfast. Now he is being treated in a rehabilitation center.

Saturday was his day off from the center and he wanted to participate in the Gay Pride. But it was also his chance to drink alcohol. So he did, a lot! He has at least five huge cans of beer in his paper bag.

I felt a mixture of pity and care for him. Here was a man who worked so hard and ended in a hospital, with no one giving a damn if he is still alive. To make things worse, people are afraid of him. He doesn’t have anyone.

I do not know how the conversation turned into beautiful men. But what I faintly recall was that he asked me about what a handsome guy is for me, I gave an example of this boy with blue eyes who was just stepping inside the train. And then I asked “En jij?” meaning of course what type of girl he likes. We were in Den Haag Centraal station and there were a lot of people coming in and he was pointing to someone. I thought that he meant the girl with brown eyes. Robin later told me he was pointing to the boy with brown eyes and curly hair. I did not know he is gay.

Seeing the train so full, he invited this girl to sit on the empty chair beside him. But the girl refused, obviously afraid. I told him, she is afraid of you. He said, “Waarom? Vind ze me niet aardig? (Why, she doesn’t find me friendly?)” And again, I saw that his blue eyes about to tear up. They were full of sorrow.

We continued talking along the way, him seeming to enjoy telling his stories and hubby intently listening to him, me barely understanding what the topic was about. I got tired of too much Dutch so I fell asleep. I woke up just when the train was about to enter Amsterdam Central Station.

“Lekkere geslapen (Did you have a good sleep?),” he asked. I nod, barely awake. “We zijn hier.”  He gave me a timid smile.

When we were about to step out of the train, I noticed that his face has became very sad. Then tears started falling from his eyes and he was obviously preventing them to. I wanted to reach out for his hands and give him a hug. It is probably the first time that people actually talked to him.

He wiped his tears away and we stepped out of the train together. He and hubby shook hands and I waved. Then he walked away.

When he was out of sight, I started crying. I have seen despairing stories about gay men before but this has got to be the most depressing. I do not understand why life should be so hard on him. But I do not have answers. For sure he is to blame as well. He chose alcohol. But must society be so hard to people like him – alone, gay and struggling to overcome a habit that plunged him into desolation?

And worst, we did not even ask his name…

While filming the Gay Pride, we bumped into him again. He was so happy to see us. When he saw hubby’s camera, he wanted to have his picture taken.

He invited us  for a bottle of beer. We did not refused and tried to have a lively conversation. But we failed.

I wish to see him again and ask him if its ok to visit.

Conversations: the difficulty of learning a language

A better version of myself