Chicken liver seems to abound Prague’s menu for a reason that I haven’t researched yet. In the first store we walked in after seeing Sleeping Beauty: The Czar’s last daughter in Prague’s famed theater, we headed to this tiny restaurant around the block. Since I was cold and very hungry, I wanted a quick warm meal that is also quite familiar. I ordered chicken liver in soy sauce. We also have a similar dish in the Philippines but between the two, I’ll choose my country’s anytime. This is served with toasts while ours is with rice. Either it’s actually good or it was my hunger that made me enjoyed this to  dish to bits. 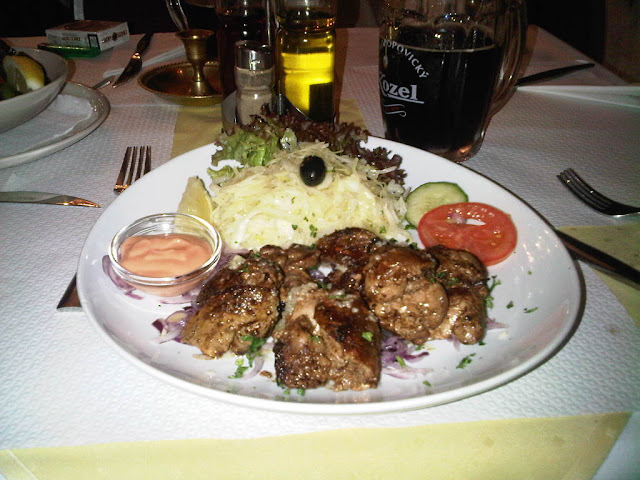 The second attempt to eat another Czech’s chicken liver delicacy wasn’t as successful. Here is grilled chicken from a quite fancy Prague restaurant which name I forgot. Burned and bitter, I didn’t even finish a quarter of it. Thanks to the sweet Kozel, I did not walk out of the restaurant.

Pardon the ignorance, but I cannot recall whether the picture above is Houskove Knedliky (Bun-Dumplings) or a Bramborove Knedliky (Potato dumplings) but since it is not sliced, I presume the latter. Although this dumpling has sausage and pork fillings and served with the my second most hated vegetable next to white asparagus, sauerkraut. Knedliky is said to be Czech Republic’s most popular local dish. Definitely a great bed partner of beer.

In this lovely Restaurant Lvi Dvur at the back of Prague castle, I spent 1500czk for their famous suckling pig. The grand clocks and the cava’s did not make up for the disappointment of ordering this very expensive food we call “lechon baboy” (roasted pig) in the Philippines. Probably the same manner of cooking but their sauce ruined everything. The skin, which is supposed to be the most delicious part, was not crispy, the gravy/sauce is extremely salty *and I am not saying that lightly. Served with a few pieces of lettuce, this is almost 62euros of a disappointing meal.

I cannot speak for the rest of the restaurants in Prague serving the roasted suckling pig but the only variety of this that I will eat would be from Cebu, Philippines. 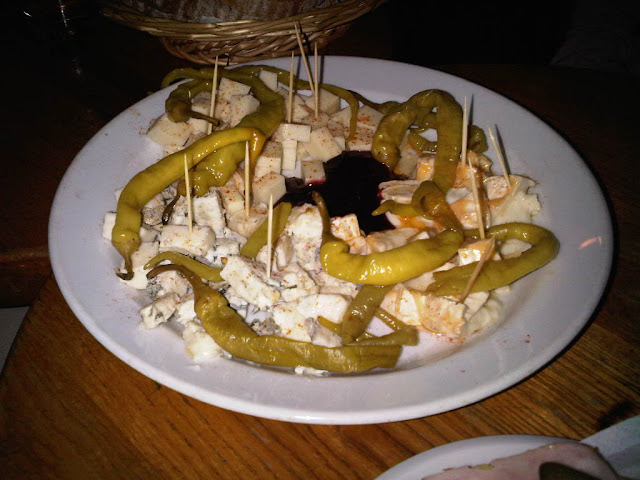 This plate is a popular “pulutan” or drink food partner in the underground bar, restaurant and club U Sudu. This hidden party place has maze-like rooms where you can play pub games like pool, eat dinner, blast your ears with rock music or taste different kinds of wine. The place is frequented by locals and very easy to be missed because of its unassuming facade. If you want to taste the local party scene but not wanting to join the hordes of tourist in Prague, look up for U Sudu.


I am not discovering another great East European city and so far the selection of food has been better. In the next post, Ill tell you about paella’s, churros and ither delicacies from my visit to Spain last year.

33rd: Escape to the Vosges