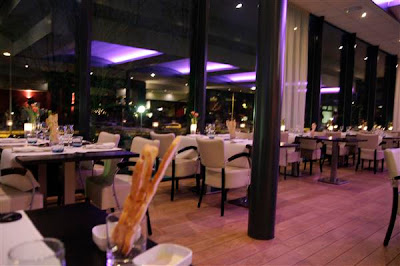 Part of our booking at Hof van Wageningen was a 4-course dinner at the hotel’s EatCetera restaurant. It is a pretty decent place despite the snack-bar-sounding name (talk about Dutch’s imagination). There was a little confusion when we reserved for tables because apparently, the receptionist doesn’t have any idea that the dinner was part of the package. We checked in at 5:30PM and were expected at the restaurant an hour after. We only have enough time to unpack, take a shower and relax just a bit before dinner time.

I chose a corner table when the waiter ushered us in. There were only a couple of diners when we arrived but an hour later, the whole place was packed mostly with old couples dining out with another old couples, some families and a few lovers probably on a pre-Valentine’s date.

There is a cosy ambiance about EatCetera Restaurant but I would not really go here for formal dining. They offer a 3-course menu for EUR25 which I find a bit cheap for an a la carte dinner (considering the sky-high prices in Dutch restaurants). On my mind, I was asking, what’s the catch? I didn’t have high expectations. 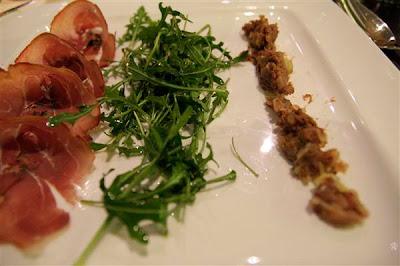 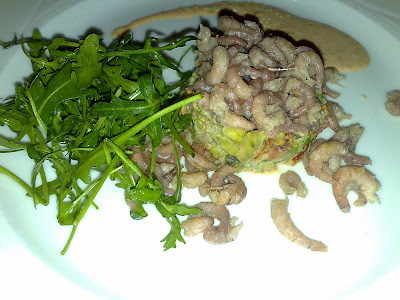 For a starter, I ordered Hollandse Garnalen *those tiny flavorful shrimps, with avocado while MK chose smoked ham. With rucola and tartar sauce, mine was delish. MK said he enjoyed his as well but it did not really show in his face. 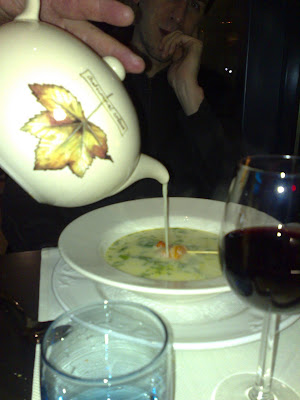 Next came the soup. MK’s chicken soup in coconut milk, coriander and lemongrass with two pieces of shrimps was a delight but my lobster soup was a disaster. It was too salty and tasted like hundreds of lobster were boiled in the water, poured with half a cup of salt and served to me. Never mind the really chic way that the soup was served to us, mine was a total disappoint. After two spoons, I set it aside and when the waiter came, asked him to remove it from the table. The smell alone made me heady. In fairness to the staff, they apologized and offered another choice but I had to decline because I might get too full to enjoy the main course. 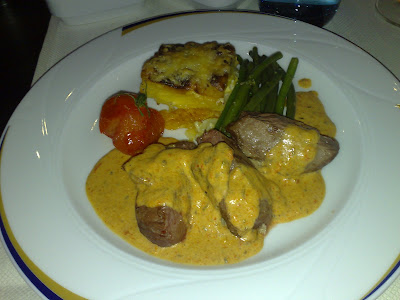 Turned out that my main course would be another mistake. I ordered Rose-grilled lamb with string beans and baked potato. The lamb was dry and tasteless and the sauce a bit bitter. It’s not as disastrous as the lobster soup but I lost appetite after few bites. But since I am hungry from the long trip and hate food go to waste, I tried to swallow several more bites until there two pieces are left on my plate. MK tried to eat the rest but only one piece, all the time complaining about its dryness. 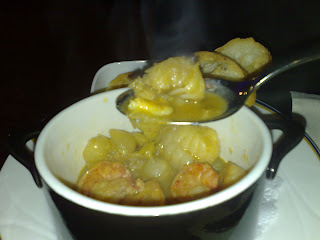 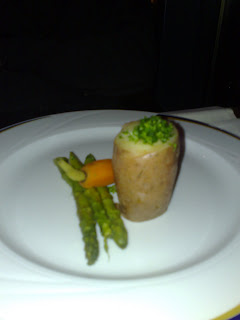 Sea-devil with asparagus and potato

One the other hand, his sea-devil dinner was not a bad choice, served with more shrimps and a lot of onions. I shared a couple of shrimps but since I already a bit full from eating the lamb and swallowing it with water, I couldn’t tell much about his food. 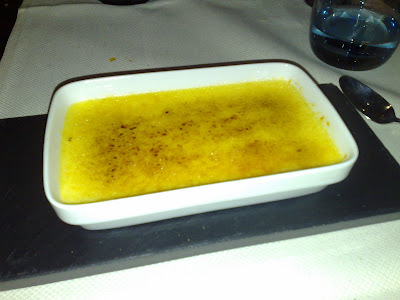 I was very thankful that the main course was over. I look forward to dessert a to forget all the bad taste from my last two dishes. A favorite of mine and a sure order if its on the menu, is creme brulee. I was expecting a small, traditional round serving but instead got a whole small baking plate of creme brulee with star anis. Must say, it did help erase the bad memories from my tongue but such a big serving actually makes you feed up with it immediately. 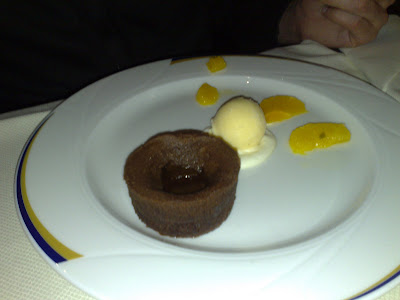 Fortunately, MK’s chocolate moelluex once again saved my appetite. He seemed to have all the right choices for that dinner.

Don’t get me wrong, I am not complaining. After all we did not actually paid a fortune for that dinner. We actually paid for a weekend getaway to celebrate heart’s day away from the city. And it didn’t matter that the food was not that delicious, our 3 hour romantic dinner had been most enjoyable, like our first Valentine’s date back in 2008.

January actually marked my 1st year in the Netherlands and by that short period of time that I’ve dined out in this country, I’ve learned to expect that, a restaurant in a 3-star hotel (or any formal restaurants) that offers EUR25 for a 3-course dinner will really give you your money’s worth. This is Netherlands after all, where everything, expect milk, is expensive! And don’t forget that the Dutch are business people, you always get what you pay for.

Conversations: the difficulty of learning a language

Musings: How weekends should be