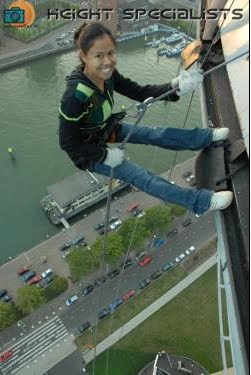 I am becoming an adrenaline junkie lately. Blame it to boredom. After the bungee jump in Scheveningen, I wanted to be scared to death again and was willing to pay hard-earned money for it. While dining at the Euromast Brasserie one summer ago, I saw a couple of people dangling down from my window. I thought they were window cleaners but they were not. After a little research, I found out that they were rappellers, some daredevils who are probably searching for a little more excitement in this boring country (open to discussion)…like me. My heart skipped a beat. I have found another way to experience some adrenaline rush again.

Reservation was easy and done through the Internet at www.heightspecialists.nl. I reserved for a perfect time, 7 in the afternoon. Just when the sun is setting in the Port of Rotterdam. Abseilen (rappelling) in the Euromast possible the whole summer but usually only during the weekends unless there are special requests. The fee is EUR45,0 including the entrance to the Euromast which is EUR7,50. Certainly cheaper than the bungee jumping in Scheveningen and just as thrilling. 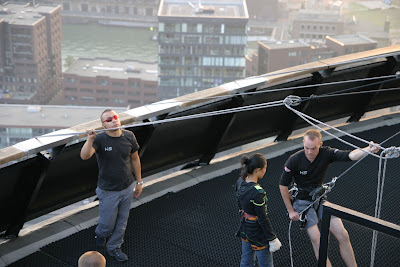 I arrived 10 minutes before and waited a little bit for another person who reserved for the same time. The sun was just setting and the sky was cloudy. It even seems that there was an impending rain. Fortunately it didn’t push through and it wasn’t that cold either. As usual, I was giddy and excited, not yet afraid while still on flat surface being instructed by Tom about how to lower myself down.

I don’t think I even understood half of what he was saying because the fear started to creep in.  All I remembered was “keep your eyes on the figure 8” by which he meant “don’t take your eyes off the knot. He showed me some technique on how to make the ascend easier but I was too worried that I couldn’t recall most of it.

R was patiently taking pictures  from a distance with his new Tamron 17-50 2.8 He wasn’t allowed inside the restricted area because they have an exclusive photographer. They will sell the photos to you later at  EUR5 a piece. Quite pricey.

When the other person did not show up, we decided to go on. Tim will be rappelling with e. He said it precautionary because whatever happens, there’s a professional who can immediately help.  That lessened the fear a bit. 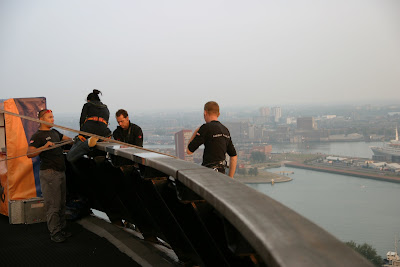 After one of the crew made sure that I am all feared up, he told me to step in his legs so I can go over the edge of the viewing deck. Now that is where the real fear started.

My fear of heights automatically made my knees shake but seeing the tiny cars and the pavement below made me nauseous. I couldn’t move anymore. I think I stopped breathing. I was just dangling there at the edge waiting for miracles to happen which will take me safely on the ground. I felt the same when I was 60 meters above the North Sea for my bungee jump. The only difference is that, if an accident happens, my frail body will be crushed to death instead of being swallowed by cold water. The image froze me 100 meters above ground with only a rope separating me from life and death.

The crew tried everything to assure me that it is safe – that the two sets of ropes fastened to my belt are strong enough to hold my 43 kilos of height, and that if ever I slip, the guy below can easily halt my fall by just stepping on the end of the rope lying on the pavement below. I was not convinced at all. 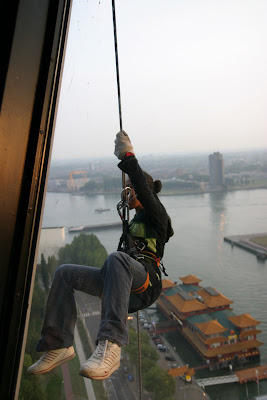 “It’s safer than using the elevator, it’s even safer than high school”, said Timon when I asked him twice if the thing is, well, safe. It’s comforting to know that he will be rappelling down with me and I will have somebody there to talk my fears out.

The Asian-looking member of the crew told me to grab the ropes and lean back, like I am falling. I couldn’t do it at first so Timon held out his hand and told me to put my weight on his hands then straighten my legs.

Before I can start ascending, I would have to step on the glass walls of the Brasserie. It was difficult because my knees and legs were like jelly but after convincing myself that there will be no other way down now, I was able to do it. 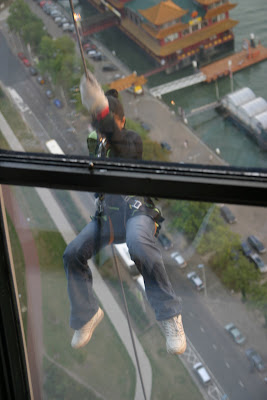 I weigh only 43 kilos and the rope that I have to feed to the knot is estimated at 50 kilos.  That means the rope is heavier than me, making it harder to pull. Timon said that their minimum limit is actually 50kls because it requires more effort for the rappeller to lower himself/herself down. In my case, that is very true because it took all the effort that I can squeezed out of my tiny body to lift the rope.

It was only after 50 meters down when I found out that I could have done it in an easier way. By letting the rope just slide through my right hands and feed itself to the knot. But I was holding on to dear life and the rope was my saviour. I didn’t want to let it go. 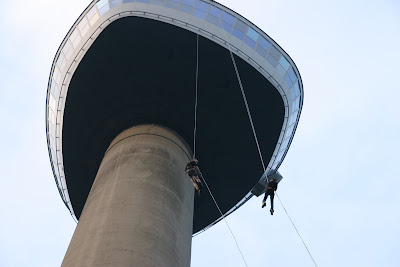 Timon and I talked for the rest of slide. I told him of my bungee jump in Scheveningen as well as R and I swimming with the sharks in Palawan. I told him that I can do this again and the next time, I will be less agitated. For several times, I paused a bit, just rested my hands on the rope and enjoy the tranquil view of the port of Rotterdam stretching in the horizon. I can see old Hotel New York, the famed Erasmus Bridge, the Maas River and the ships crossing it, the new Maasvlakte port extension and parts of Schiedam. The city of Rotterdam looked very calm from that height, a perfect landscape of the old and new world, quite romantic with the setting sun, the gray clouds and the little flickers of light from the buildings. Too bad I couldn’t stay there that long. 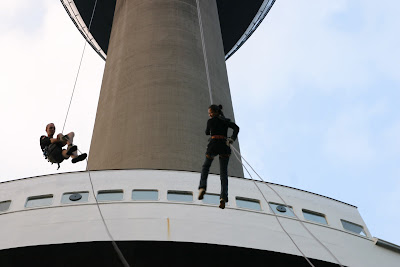 The rest of the slide was surprisingly easier, the rope began to get lighter to pull. At first Timon was holding my rope but he let go after a while he let go and allowed me to enjoy the rappelling all by myself. It lasted for about 8-10 minutes, some of the best minutes of my life.

Finally I was able to look down without being scared shit and  enjoy the view for the  last few minutes of my slide. For a moment, I uttered a prayer of gratitude for all the good things in my life – including surviving this very scary adventure. I 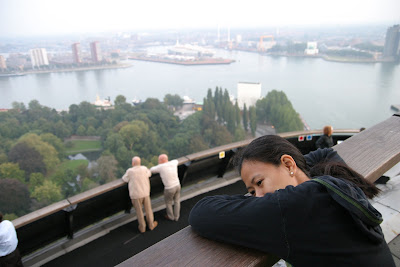 I was exhausted but happy.  I did not want to touch ground but good the adrenaline rush was already fading. After they untied me, R and I rushed back to the viewing deck and wait for the Euroscoop to come down and bring us to the highest point of the Euromast.

But that is another story…

A vodka story in Crimea