April 9, 2015 by The Weekend Traveller 1 Comment
Whhat exactly is a Thai massage? Well, it’s a systematic kneading and pinching of your sore muscles as well as pulling, twisting and bending of your ligaments in various and sometimes in the most awkward ways. It involves pain – as little or as much – as you can handle. If you are a masochist or you simply want a deep-tissue massage, the Thai way is the best option. But I mean the real Thai thing, not the one with the “happy ending”.
END_OF_DOCUMENT_TOKEN_TO_BE_REPLACED
Share:
Travel 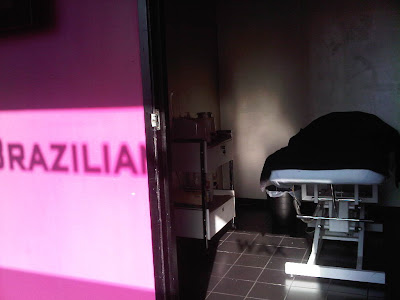 When you live  in the Netherlands and you avail of regular service that cost a fortune, you just don’t stop searching until you find one that offers it for less. This is ‘een echte Nederlandse‘ trait. Most of the time, it can be very good on your portemonnee, especially when you are not crossing the thin line between being frugal and an illogical tightwad.

I have adapted so well this otherwise handy skill. And so when presented an opportunity to try another beauty salon for my Brazilian wax, I wasted no time booking an appointment. I have tried the best in Amsterdam but it was a bit expensive considering that I have to travel all the way to another city. There was also one in Rotterdam but since I discovered Monaas, I decided it is better to save the extra 12 euros.And save extra time. The woman works fast. 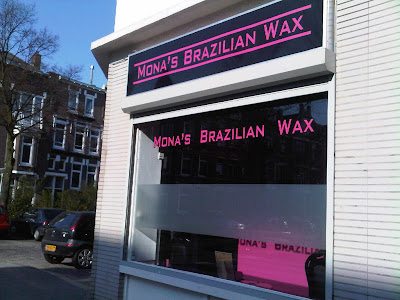 Monaas Brazilian is located few blocks away from my office. They are open until 10 in the evening so it is convenient for working girls (they do not accept men) to drop by after work.With the bikini season fast approaching, the small salon run by a liefde Moroccan girl is getting busier everyday. 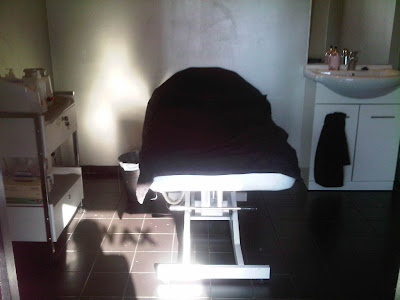 I must admit though that  Mona (or her assistant) doesn’t work as particular and gentle as Angel (of Angel’s Beauty Salon) but she does the job well nonetheless. I still left her salon feeling sexier and cleaner with no hairs down my crotch.

Monaas Brazilian salon is not as big nor as prepped as Angels or Aesthétique Cocon. But who needs extreme comfort when you are still feeling pain when hairs are being pulled out of your skin? A softer bed or a perfumed room would only help so little. A good way I have learned though, the first time I went there, is to drink two glasses of whiskey before your wax. 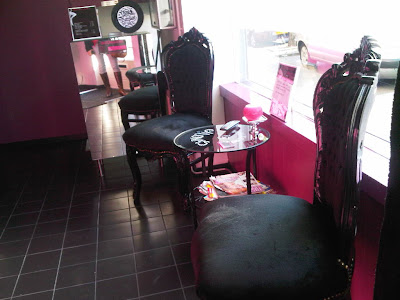 Brazilian wax cost 30euros while lower and upper leg cost 17,50 respectively. She throw in for free the boven lip (upper lip) which usually cost 5euro. I wasn’t impressed though, the next week, I was back to having a mustache.

Monaas Brazilian is located at Berkelselaan 64-B 3037 PH Rotterdam. If you want to set an appointment, a call to her cellphone is the best way to do it. She may not answer immediately due to the volume of customers but she will definitely call back. Her number is 06 52266804. You can also visit her site at www.monaasbrazilianwax.nl

So I think I will be staying with Mona for a while or until I find another salon where Brazilian wax is at 25euro. Like I said, I wont stop looking. 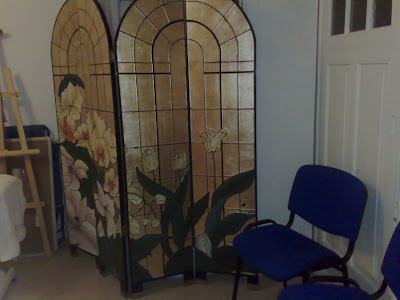 It took three months before I can go back to the salon to have my unwanted hairs removed. I am glad I waited that long because I discovered another waxing clinic which is nearer than Amsterdam. My last brazilian wax from Aesthetique Cocoon was May and I didn’t have time to schedule another appointment due to my busy schedule.

Unfortunately when I tried to book an appointment with Ria on the day of the Gay Parade, she couldn’t accommodate me due to the volume of customer she had that day. So I tried searching for other salons that offers Brazilian waxing in Amsterdam. I found some names like Beauty and Nails Marie Claire which offers the only sugar waxing in Amsterdam. Again it was unfortunate that when I tried calling them several times, only a voicemail can accommodate me. So instead of wasting my time looking for other options, I searched for one that is in Rotterdam. 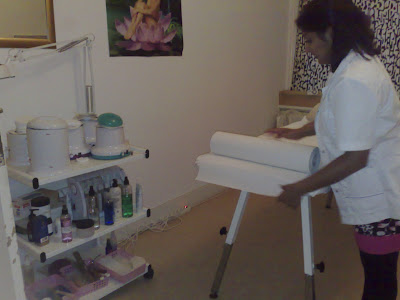 I discovered More Beauty Exploitation’s Angel Salon owned by Angela Ganga-Jasai which is located in Graaf Floristraat 78A. Because I came from school and the train was always late from that part of Rotterdam, I missed my initial appointment. Angela was considerate enough to reschedule me on the same night.

I was doubtful at first of the quality of the service because their website, www.angelsbeauty.nl was not professionally designed. But I was proven wrong by Angela’s expertise in this profession. She is a witty woman who knows her craft from the basics and loves her job passionately. 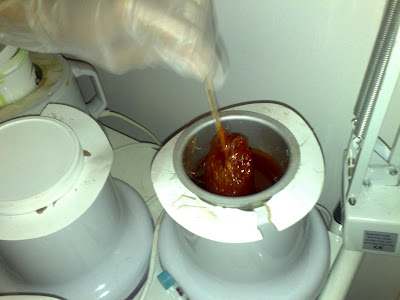 Unlike Aesthetique Cocoon’s blue wax, Angel’s Beauty uses brown wax. According to Angela, the blue wax is an old type of wax that was made of chamomile so that it will be gentler to the skin. Meanwhile, the wax that she is using is made of the basic wax with some plastic ingredients which makes the wax softer but has more hold on the hairs. Personally, I find that the brown wax applied to me is better than the blue wax because it is very effective in pulling the hairs from the roots. 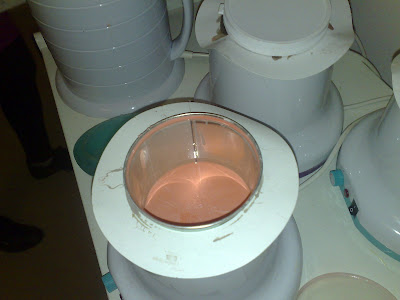 She also let me try the pink wax which uses strips to take the hair off, the same technique that they use in the Philippines. Because strip waxing is more painful, I told her that I prefer the other technique.

The Brazilian wax took at least 30 minutes and was less painful than that in Aesthetique Cocoon. Angela was also very talkative *like me, explaining to me the right way that a Brazilian wax should be done. She works fast and efficient and told me several ideas about Brazilian waxing that no waxer have every told me. It’s a plus that she speaks English very well so we were able to communicate better.

I also had my whole legs waxed after 6 months and Angela worked very fast on it. She applied a thin layer of brown wax on my legs using a metal spatula, unlike with the Brazilian where she uses a wooden applicator to apply thick layers of the wax. This time she uses large strips to remove the hairs. I think it just took about 10 minutes to do the whole legs. Had I brought more money, I would have had my torso, lower lips and chin waxed as well but I’ll just leave that for MK to do. I think he gets a high watching me cringe in pain whenever he waxes my upper lips and chin.

Angel’s Beauty two-floor clinic is housed in an old building with a quite surroundings. Because of the high ceilings, the room is cooler than Aesthetique Cocoon and I don’t remembering getting warm or sweating out in the entire duration. 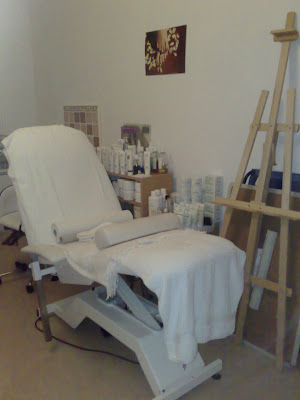 There is only one room for waxing, facial and body treatment that’s why Angela can only accommodate one person at a time. She is also the only one working on her salon because the one doing the massage left two weeks ago. The treatment room is spacious, with two beds for separate treatments and a shower. 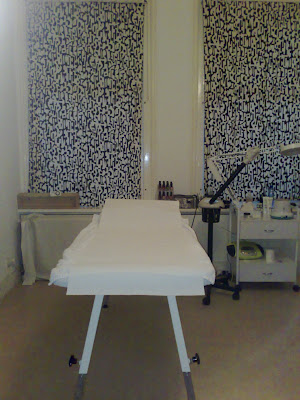 The waxing bed is higher than normal waxing beds. I forgot to ask Angela why is it so but I would assume that it’s because she likes to do the waxing standing, another characteristic that separates her from the other waxer that I’ve known before. The bed also reclines to give comfort to the client. I also noticed that it is softer than most waxing beds Ive experienced before. 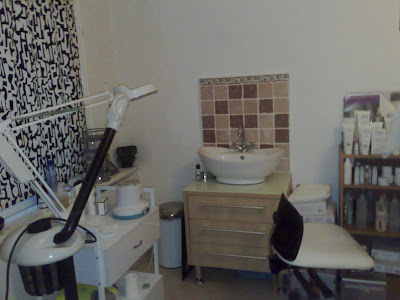 There’s a cutely designed divider that separates the shower from the rest of the room. Beside it are few chairs which are reserved for the companions of the clients. There’s also the standard wash bin and the tables where all the respective beauty paraphernalia are arranged. And I love that cute wallpaper black and white wallpaper that covers the window. Well I am not really sure if its a wallpaper but it gives a nice contrast to the whiteness of the whole room and adds life to the usually boring salon rooms.

The cost of the service, Brazilian wax and full legs wax was EUR82,50. Her rates are just a little lesser than that of Aesthetique Cocoon but it’s definitely cheaper for me because I don’t have to go all the way to Amsterdam for my regular waxing. The trip makes the cost twice more expensive because I usually bring MK with me.

There’s still a lot to be written about Angel’s Beauty and Angela herself but I will reserve that for the next post. Meanwhile, if you want to check out Angel’s Beauty, probably the only waxing salon in Rotterdam or the only one offering Brazilian wax in Rotterdam, visit her website at http://angelsbeauty.nl.

My experience with Angel’s Beauty can be summarized in one thought, don’t judge a book by its cover, or for this matter, don;t judge a salon by its website!